Humans have been brewing beer and ale for millenia, often in small batches even in individual homes. By Alfred’s time, great castles, fortresses, or manor houses might very well have had a brew house on the premises to supply beer and ale for the residents. 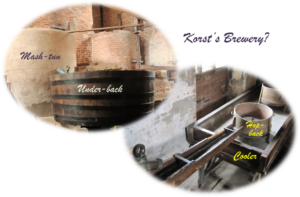 Hot water would be added to crushed grain in the mash-tun and the mixture would be stirred with a paddle into a mash, converting the starch in the grain to sugar.  The sweet extract, called wort, was drained off the mash into the under-back, and the mash was then rinsed a second time to ensure all the wort was captured.  Next, hops were added to the wort and the mixture was boiled for a couple of hours, after which it was drained through the hop-back (a large sieve that captured the spent hops) into the cooler. Once the liquid was cooled to the proper temperature, it was drained into a fermenting tun, yeast was added, and it was left for a few days to ferment.  When fermentation was complete, the beer was drained into casks that were stored in cellars to mature.