It’s been two weeks since I returned home from the Kingdom Across the Southern Sea. A journey that would have been unnecessary if not for the devil’s bargain King Charles made to try to rid himself once and for all of me – whom he considered the architect of all his problems – and the Duke of Aleffe, in whose name the rebellious lords rallied, though the Duke himself remained staunchly loyal to his sovereign. And Charles’s failure cost him dearly – his crown, his health, his mental faculties – everything, in fact, except his life, though it’s barely a life in his current condition.

Ironic, then, that I should have been the one to pull his kingdom back from the precipice of self-destruction. To set in motion the things that put it on a path to restoration of its proper place in the world.

Devereux had anticipated my wishes or the lords’ anxious curiosity or both and summoned the Council and all the lords to meet on the second day after my return. At a private supper in my mother’s sitting room the night before, I mentioned that Hugo – I simply can’t bring myself to call him Lord Meriden – didn’t seem to be at court. “He received the same message as the others,” said Devereux. “And he sent a reply back with my messenger saying he was otherwise occupied, and, besides, only the king could summon him. I absolutely despair of the man’s behavior, Alfred.”

“Maybe he’ll have second thoughts and put in an appearance tomorrow.” Neither of us was surprised, though, when his seat remained empty as the lords gathered in the Council chamber.

I’d had a day to think through how to report all that happened without revealing my part in hiding the Viscount Aleffe for almost a year. Only Gwen, Abbot Warin, and Brother Eustace – and of course, the young man himself, who is now King Denis – are privy to that knowledge. It may eventually be revealed, but the longer that day can be postponed, the better for everyone in four kingdoms and the Territories. 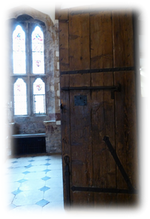 No one’s attention wavered as I described the meeting in the forest with the Teuton king, Charles’s dire state after suffering torture and beatings at the hands of his captors, getting him home without anyone becoming wise to his condition, convincing his queen to abdicate in his name, and finally, the coronation of young Denis with the dowager queen Petronilla as his regent. “So, to sum things up, gentlemen, our alliance across the sea is restored, Goscelin’s kingdom – Denis’s kingdom, I should say – is no longer trying to tear itself apart, and there’s a truce of sorts with the Teutons. And in a week’s time, Denis and Richenda will marry, further cementing our alliance.” I let them draw their own conclusions about what that signals to anyone who’s watching.

They sat in silence when I finished. What they’d just heard was a lot to take in all in one gulp. At long last, Montfort voiced what must surely have been on everyone’s mind, “And what confidence can we have that the situation will last? That the turmoil in Goscelin’s – sorry, Denis’s – kingdom really is put to rest.”

“Well, if Lord Greville has half the influence Petronilla believes him to possess and if the Duchess of Aleffe can tap into some of her father’s ability to exercise restraint, then I’m optimistic that by the time young Denis comes of age and begins to rule on his own, he’ll do so on a solid foundation.”

“Those are two rather big ifs,” said Bauldry, “in a land that’s been so fractured.”

“I don’t deny that. Which is why Petronilla insisted our support be part of the bargain that made her regent and why I agreed.”

The silence returned, this time accompanied by some furrowed brows. They’re accustomed to being consulted in such matters – a luxury I didn’t have in the moment, where so much depended on acting quickly.

“Then it seems to me,” Phillip spoke at last, just when I was beginning to think it would be up to me to break the tension, “we should find ways to support them peacefully so we don’t have to think about the alternative.”

“Well said, Thorssen.” Ernle. “But we have to strike a delicate balance between letting them find their own way and reinforcement. We can’t risk any perception that we might be steering the ship.”