The soft light through the window wakes me gently from a very deep sleep, and I open my eyes to survey my surroundings. I’m in an unfamiliar bed in a room I’ve never seen before. Across the room, beside the window, a man in priestly garb dozes in a chair. Trying to raise myself up to get a better view, I discover I’m almost too weak to do so. My stirring brings the priest immediately alert.

“Ah,” he says quietly. “I see you have decided to come back to us.” Crossing the room, he sits beside me on the bed and places one hand on my forehead. “And the fever has not returned. That is good – very good indeed.”

“Where am I? What is this place? And how did I get here?”

“I shall leave your first two questions for others to answer. As to how you arrived, I am told that your horse brought you.” I must look puzzled, for he continues, “Yes, I know that sounds silly since that is how men go places. Yet I am told that when you arrived, you were delirious with fever – barely able to stay in the saddle and clinging to your horse’s neck – and that the horse brought you here and called out for help.”

Vague recollections. Of endless rain. Of giving Star Dancer his head. “You say there are others. Are they sick as well?”

“They are not. Nor do I think they will be, and for that I credit your lady wife.” So it wasn’t a dream! “She realized immediately that you had the sickness, so she made everyone leave the room, including herself. Anyone who had touched you – she made them strip naked and have a hot bath – fresh water for each bath. She ordered all the clothes burned, including her own. Then she banished everyone to the other side of the house and sent for me.”

“She thought I was dying?”

“Quite the contrary, my son. She wanted to be sure you would survive. You see, I spent some years with the monks of St. John’s Abbey where I learned their medicines and their methods of healing. They are by far the most skillful of any in this land. So you might say that I am a healer of men’s bodies as well as men’s souls.” His speech has the sing-song rhythm of the Kingdom of Lakes though he speaks my tongue with ease. Wherever I am, it must be somewhere in Gwen’s homeland.

“How long have I been here?”

“Today marks the fifth day. When I arrived you were still in the grips of the fever. I was able to rouse you enough from time to time to drink the infusion of herbs I had prepared. We know not why, but this infusion helps to keep the throat from swelling, which is the most dangerous part of this sickness and what usually causes death. When I could no longer get you to drink, I kept a steaming pot of the infusion by your bedside. Strangely enough, breathing the vapors – while not as good as drinking the draught – can also have a beneficial effect.”

A steaming pot of his mixture sits on the table beside the bed. I sniff it cautiously. Surprisingly, it doesn’t have the stench so typical for medicinal preparations, instead smelling slightly floral but also oddly pungent.

He continues. “Two days ago, your fever broke and you fell into a deep sleep from which you could not be roused. Some think this is the spirit deciding whether to go on to the next world or stay in this one . . . and perhaps sometimes it is. But the monks taught me that often it is merely the body’s way of taking the time it needs to heal itself.” He hands me a cup of water. “Drink. We must begin to replenish what the fever took away from you.” The water is fresh and sweet.

“Now,” he says, “we must clean your body and cleanse this room before anyone else can be allowed to enter.” From behind a screen, he pulls a tub partially filled with water to a spot near the hearth then takes an enormous kettle from the hook above the fire and pours steaming water into the tub and into a large pitcher nearby. 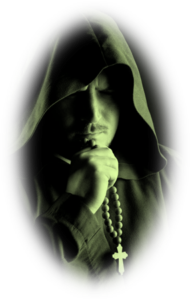 Coming back to the bedside, he says, “Let’s see if we can get you into the tub.” Again, I’m astonished at how little strength I have, but he manages to get my nightshirt off and practically carry me into the tub. Though a slight, wiry man, he’s remarkably strong. “Bathe yourself as best you can while I attend to a few other matters.”

He removes all the bedclothes and piles them on the floor. Then he removes his own cassock, adds it to the pile along with my nightshirt, and ties the whole lot into a big bundle that he tosses out the window, followed by the pillows and the top mattress from the bed. “We will burn that lot.” Holding his hands out the window, he pours water to cleanse them. Next, he retrieves a fresh cassock from the large corner cupboard, prepares the bed with clean sheets and new pillows, and lays out a clean nightshirt.

Those tasks complete, he returns to make sure I have a proper bath. Getting me to my feet, he pours the pitcher of now-warm water over me to wash away any remaining soil from the bathwater, helps me out of the tub, and wraps me in a blanket to ensure I don’t get chilled while getting dry. Finally, he pulls the nightshirt over my head and helps me back into the bed, propping me up on the pillows. I’m utterly exhausted from even this small exertion. Satisfied that I’m comfortable, he pulls the tub back behind the screen, taking great care not to spill anything. “I will deal with that later when I have someone to help me.

“The final thing before I let you rest. We must cleanse your mouth.” He hands me a different cup. “This is vinegar with a little water. Swish it around your mouth and gargle, but do not swallow.” I fill my mouth from the cup – vinegar, for certes – and follow his instructions, spitting it all out into the empty pitcher.

“Now for some nourishment.” He makes for the door to the corridor. As he opens it, the room fills with the outside air coming through the window. “I shall leave this open to draw in the fresh air. It has healing powers of its own.”

He’s not gone long, returning with a tray containing a bowl of hot broth, a small piece of bread, and a fresh cup of water. The broth is delicious and after a few mouthfuls, I reach for the bread. “It would be best, my son,” begins the priest, “if you would . . .” While he’s speaking, I tear a piece off the bread and soak it in the broth before putting it in my mouth. “Ah! It seems you know what to do.”

I smile at him. “I once had to recover from near starvation, Father. It seems the monk who cared for me then must have learned skills similar to yours.”

“Then it seems you have been twice blessed, my son.” The hint of a smile appears on his face. “The broth and water will restore what the fever took away. And tomorrow we will add a bit of porridge.”

“Perhaps with some honey, Father?”

“Why not? Honey also has healing properties. By the way, you should know that for the first day or two, your piss will be dark – perhaps even brown. Do not be concerned. That is actually a good thing – your body ridding itself of the poisons left behind by the sickness.

“Today, you should rest. Then tomorrow you should begin walking around a bit, to start getting your strength back. After that, you can be the judge of how much to eat and how active to be. Your past experience will be a good guide.”

While he’s been talking, I’ve finished my meal. “I’m surprised how hungry I feel, but that’s enough for now,” I tell him.

“Indeed,” he replies, placing the tray on the window ledge. “You can have more later. Right now, there is someone who has been waiting patiently to see you and whose patience, I fear, may be coming to an end.”